Who is the Inventor, and what does he want with the all-new Ms. Marvel and all her friends? Maybe Wolverine can help! If Kamala can stop fan-girling out about meeting her favorite super hero, that is. Then, Kamala crosses paths with Inhumanity -- by meeting the royal dog, Lockjaw! But why is Lockjaw really with Kamala? As Ms. Marvel discovers more about her past, the Inventor continues to threaten her future. Kamala bands together with some unlikely heroes to stop the maniacal villain before he does real damage, but has she taken on more than she can handle? And how much longer can Ms. Marvel's life take over Kamala Khan's? Kamala Khan continues to prove why she's the best (and most adorable) new super hero there is!

A while back I read and reviewed the first comic in this series: No Normal, a story about Kamala Khan, a girl from New Jersey who got strange powers and decided to become Jersey City’s own superhero. We followed her as she tried out her new powers and encountered someone who called himself ‘The Inventor’. In this book, we follow her as she finally meets this Inventor face-to-face, and fights alongside a very surprising (but also very exciting) companion – Wolverine!

I had looked through a copy of this graphic novel at the American Book Center already, so I knew that Wolverine would be there (but now I see it’s in the summary as well, which I hadn’t read before reading the story). So that made me very excited to be reading this second book in the series. I really hoped it would be just as cool as the first one, and I thought it was!

In this second book, Kamala finally finds out what she is exactly. Those that have seen all the episodes of Agents of S.H.I.E.L.D. so far already knew what had happened, but it was nice to see Kamala find out. We also met a couple more inhumans, including a large dog called Lockjaw. I personally really liked this dog, because he (I assume) was massive (like Fluffy from Harry Potter but with less heads), and he also had an inhuman power! 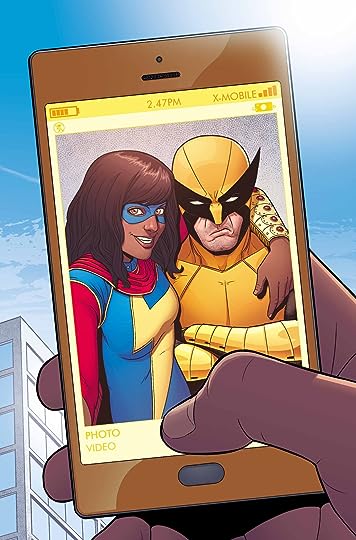 This book continues the storyline of the first book, and I personally really liked finding out more about this inventor guy. View Spoiler »Who is definitely NOT. A. BIRD!!!!! « Hide Spoiler The art is still very nice, and I loved looking at the pictures and finding out more details about them every time (anyone noticed the fish during the school attack, and the background people in a lot of the images, it’s amazing). I didn’t get through this one as quick as the first one, mainly because I’ve been a little bit ill the last couple of days, but I did enjoy every second of it!

My favourite story by far was the one where Kamala and Wolverine had to escape from the sewers, but that is honestly because I just love Wolverine so much. I loved how the two interacted with each other, especially Kamala’s fangirling over finally meeting one of her favourite superheroes. View Spoiler »She even told him about a fanfic she’d written about him and Storm, omg! And then Wolverine got pissed because it didn’t get rated higher than a fanfic about Scott Summers and Emma Frost on holiday. « Hide Spoiler

The final battle moved a bit too fast for me, and I reread several parts twice, but that was because there was just so much going on. And then it was over already, and Kamala was on her way to eat gyros with some of the people she’d rescued. Which totally reminded of the shoarma scene at the end of The Avengers. But yeah, I did find this book to move faster than the previous one, though that may be because my head just wasn’t completely there? I don’t know, but I did reread some parts in this comic a lot.

I can honestly say that Ms. Marvel has become my favourite comic so far, and I am very excited to read more about Kamala. According to the synopsis for the third book, Loki will make an appearance, and though he’s about my least favourite person in the Marvel universe, I am very excited to read about him! I’m definitely buying Crushed very very soon!

This comic is for people who love Marvel, who love Captain Marvel, who love diverse characters and humour (who doesn’t? Well me, to be honest, but sometimes – if it’s not forced – it can be funny). So if you’re looking for all that, you should definitely pick up the Ms. Marvel comics!

My opinion in one gif: